Background: Septic shock, with a prolonged hospital stay, has the highest mortality rate worldwide. There is a need for better management of the disease, which requires time-dependent analysis of alteration occurring in the disease condition and subsequent planning of treatment strategies to curb mortality.

Objective: The study aims to identify early metabolic signatures associated with septic shock before treatment and post-treatment. It also entails the progression of patients towards recovery, which clinicians could use to analyze treatment efficacy.

Methods: The study was performed on 157 serum samples of patients with septic shock. We performed metabolomic, univariate, and multivariate statistics to identify the significant metabolite signature of patients prior to treatment and during treatment by collecting serum samples on the day I, day III, and day V of treatment.

Conclusion: This study illustrates the metabolite's journey in septic shock and during treatment, which may be of prospective assistance to clinicians to monitor therapeutics.

Sepsis is a complex pathophysiological syndrome caused due to infection, which exponentially escalates from a localized immune response to a systemic immune response [1]. These systemic immune responses result in hyper inflammation, damaging organs like the liver, kidney, lungs, and cardiovascular system, known as a septic shock [2,3]. Septic shock, a severe form of sepsis, is a leading cause of death in intensive care units [4,5]. In 2017, 11 million sepsis-related deaths were reported, accounting for 19.7% of global deaths [6]. Early prognosis, diagnosis, and severity determination are quite challenging in septic shock due to their heterogeneous nature.

Metabolomics is an omics science that is a large-scale analysis of small metabolites, products of metabolism, within a cell, tissue, and body fluids [28,29]. Metabolites are the molecular phenotypes that can be used as fingerprints left by a pathway. Nuclear magnetic resonance (NMR) spectroscopy is high throughput quantitative means to perform metabolomics [30,31]. This study employs NMR-based metabolomics to study the progression of septic shock.

This study aims to investigate the time course of metabolic events, from prior to treatment to post-treatment. We performed a follow-up on day I, day III, and day V post-treatment commencement to understand the metabolic profile of patients undergoing recovery. Furthermore, our intent was to identify 'metabolic biosignatures' that correlated with patient recovery that clinicians could use. We opted for metabonomics to find insights into the metabolic fingerprint of disease during its recovery. The study aided in generating a 'metabolite dairy' and allowed one to follow each metabolite prior to treatment until its progression to recovery. We also explored the metabolic trend of metabolites in survivors and non-survivors of septic shock.

This study was at first approved by the ethical committee of SGPGIMS and CBMR.

The human serum samples for the study were collected in the intensive care unit of Sanjay Gandhi Postgraduate Institute of Medical Sciences (SGPGIMS), and NMR experiments and data analysis were performed in the Centre for Biomedical Research (CBMR), Lucknow, India. Well-informed written consent was obtained from the patients with septic shock or next to their kin enrolled in the study.

A total of 2ml venous blood samples were collected in a sterile vacutainer and allowed to clot for 30 minutes at room temperature, followed by centrifugation at 2,000 x g for 10 minutes to separate the clot from serum. The serum was transferred into storage vials, frozen, and stored at -80°C until NMR measurements were performed.

Demographic and clinical characteristics of the subjects enrolled in the study

Metaboanalyst, an online freely available web interface, was used to perform multivariate statistical analysis. The data was Pareto scaled to obtain a symmetrical Gaussian distribution before metabolomic data analysis using Metaboanalyst. Orthogonal projections to latent structures-discriminant analyses (OPLS-DA) were performed to study the data points' variations. R2 and Q2 values were used to evaluate the goodness of fit and predictive ability of the regression models. The model validation was done using 10-fold cross-validation. The Permutation test (n=100) was also applied for identifying the reliability of the model.

Treatment affects the metabolome of patients with septic shock

To systematically analyze the metabolic journey of patients with septic shock, OPLS- DA was performed on serum samples collected at the time of admission of patients (pretreatment) and post-treatment. In Figure 1 OPLS-DA showed that the two clusters are quite distinct from each other, illustrating a metabolic dissimilarity between the two groups. The OPLS-DA model generated had R2Y = 0.88 and Q2 = 0.78. 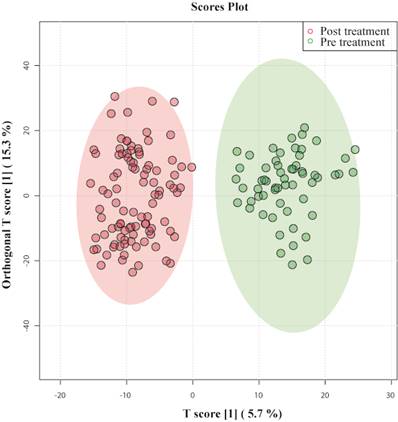 This indicates that both models were not overfitted, had good predictive power, and had a satisfactory fit. Multivariate analyses previously mentioned were used to identify the metabolites that showed a disparity between the two groups.

Figure 2 shows that there is an increase in amino acids (valine), ketone bodies (3 hydroxybutyrate and 3 hydroxyisovalerate), energy-related metabolites (lactate), mitochondrial β fatty acid oxidation (carnitine), and phenylalanine, decrease in amino acids (lysine and arginine), TCA cycle intermediates (succinate) and choline in patients prior to treatment. Table 3 shows the metabolites leading to the disparity between the two groups identified by multivariate statistics previously mentioned.

OPLS - DA identified patients according to the time at which their samples had been collected and clustered them accordingly, as shown in Figure 3. Data points of day III and day V were far from pre-treatment, indicating that they had recovered from septic shock. On the one hand, there was a slight overlap between pretreatment and day I of post-treatment; their metabolic profiles had not evolved from the disease condition. On the other hand, certain data points of post-treatment day I overlap with day III, indicating that those patients' metabotypes have progressed from their previous day. The OPLS-DA model generated had R2Y = 0.70 and Q2 = 0.64.

The discriminatory metabolites were chosen based on their contribution to the variation and correlation within the data set. Additional p-value adjustments for multiple metabolites were carried out using Benjamini and Hochberg's (1995) false discovery rate (FDR) adjustment (Bonferroni Correction). Table 4 shows the list of potential discriminatory metabolites. Figure 4 shows a decrease in the levels of several amino acids (alanine and proline), ketone bodies, and NAG, whereas leucine, aspartate, methionine, and choline increase. 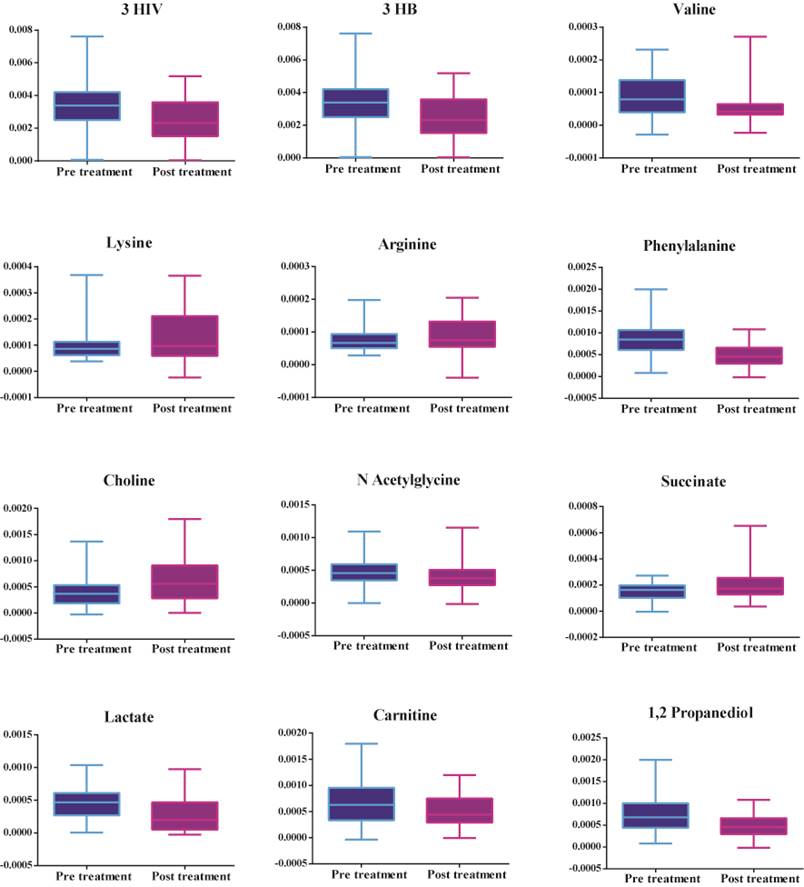 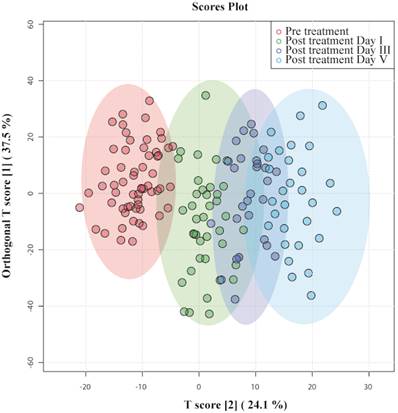 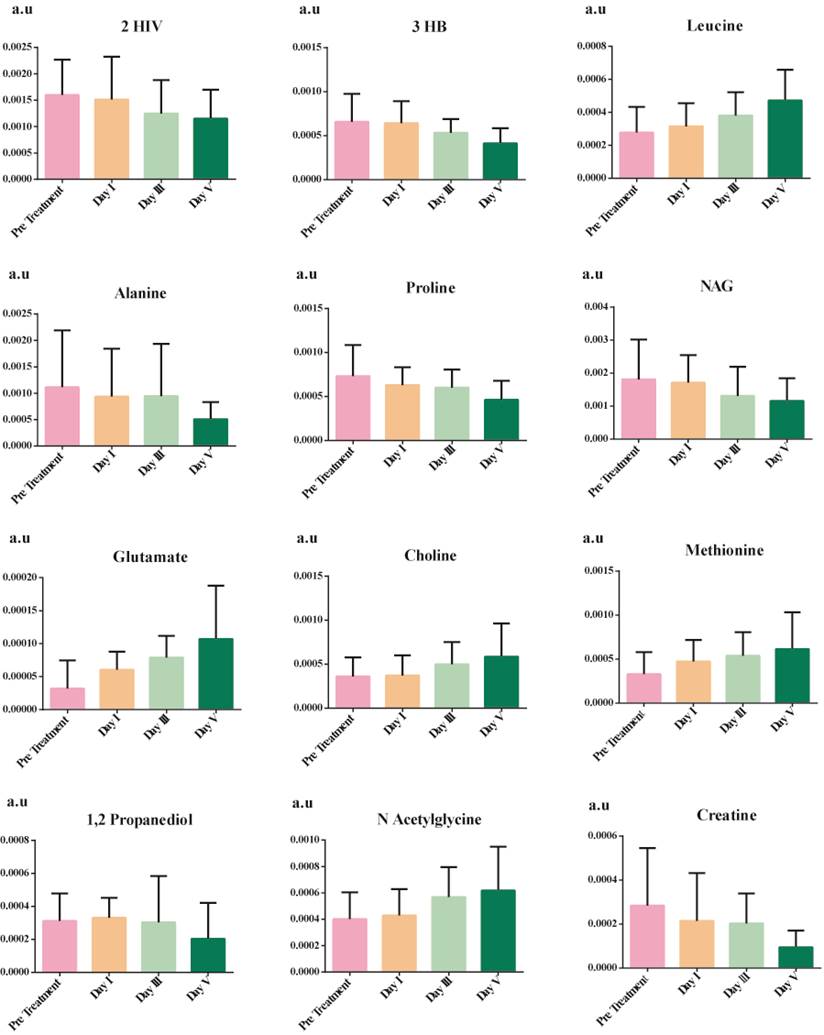 Metabolites showing variation from pre-treatment, post-treatment day I, day III, and day V between survivors and non-survivors of septic shock. 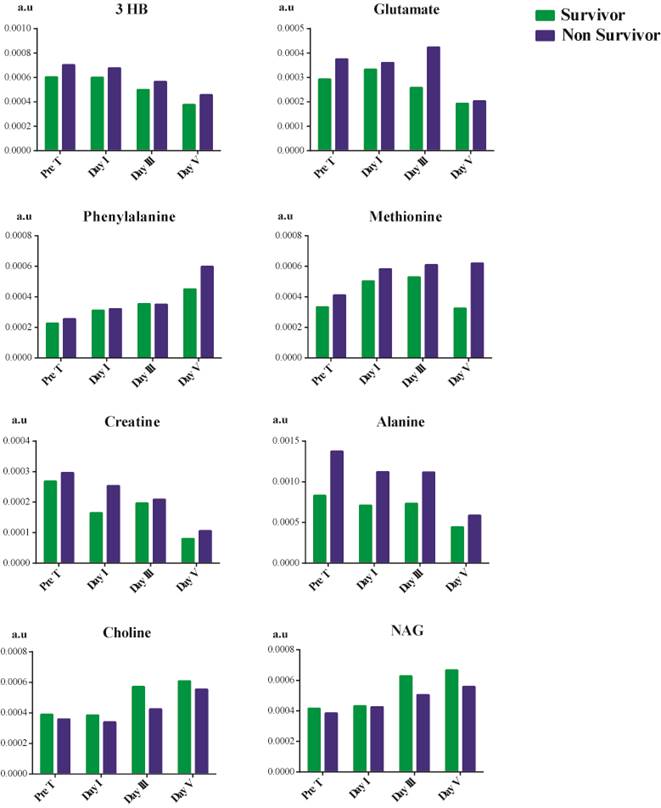 Prior to treatment commencement, the metabolic profile of patients shows the characteristics of this heterogeneous disease, septic shock. In the state of infection, the increased energy requirements are obtained from breaking down fatty acids, which results in the elevation of ketone bodies (3 hydroxybutyrate and 3 hydroxyisovalerate) [32,33]. Another cornerstone of septic shock is the resultant oxidative stress, which results in elevated anaerobic respiration, leading to elevated lactate in the serum [34,35]. There is differential expression of amino acids in the serum of patients with septic shock; certain amino acids are elevated (valine), whereas amino acids (lysine and arginine) are declined in septic shock. Lysine plays an active role in immune response activity: reduces the tumor necrosis factor, interleukin -8, and macrophage inhibitory factor levels [36,37]. However, since there is an imbalanced immune response in septic shock, it declines lysine in serum. Thus, as the patient undergoes treatment, it results in elevation of lysine resulting in an improving immune response.

Along with lysine, arginine also shows a decline in concentration prior to treatment. Arginase, an enzyme responsible for arginine catabolism to urea and ornithine, is up-regulated in septic shock [38,39]. Thus, the resultant low level of arginine prior to treatment. The elevated valine [40] and phenylalanine [41] in serum are due to protein catabolism caused due to septic shock. Carnitine plays an important role in fatty acid oxidation in the form of a shuttle system in mitochondria [42]. The low levels of succinate also signify mitochondrial dysfunction in septic shock patients prior to treatment. Succinate plays an important role in oxidative phosphorylation since septic shock leads to oxidative stress, thereby leading to suppression of oxidative metabolism and thus reduced succinate in serum [43]. Their decline shows that septic shock leads to mitochondrial dysfunction. Choline is an important precursor of acetylcholine, and its decline affects the anti-inflammatory response [44], causing uncontrolled immune balance.

Reacquiring homeostasis is an energy-challenging process involving various metabolites, as shown in Table 3. This study shows the complex changes that occur during the course of patient recovery from septic shock. The study unfolds the metabolic fingerprint of patients undergoing recovery, illustrating the reduction of ketone bodies and balancing amino acids and certain lipids to homeostasis.

One of the most prominent changes observed was the reduction in the level of ketone bodies from day I to day V of the patient under treatment. This is due to the body-switching to aerobic oxidation [45]. Leucine is an essential amino acid required for the building block of proteins. Low levels of leucine indicate malnourishment; hence, as there is a progression towards recovery in patients, the body is rebuilding itself and thus increasing the concentration of leucine in serum. There is a gradual decrease in the level of alanine during the recovery of septic shock patients indicative of repaired glucose alanine cycle [46]. Proline is recognized as a stress substrate during inflammation [47], hence gradually reducing concentration from the day I to day V of patient recovery. Glutamate plays a central role in the metabolism of the liver [48]; as the patient is recovering, liver functions are improving, thus gradually elevating its concentrations. Another liver function test is aspartate aminotransferase which requires aspartate or glutamate as substrate, and as the patient progresses, the liver is improving [49]. Thus, aspartate aminotransferase is efficient and hence increases in its substrate. Lastly, choline is shown to elevate gradually in the recovery from septic shock to bring back homeostasis in the immune response.

Treatment effects on concentration of metabolites in patients based upon mortality

Treatment aided in reducing the concentration of 3 hydroxybutyrate, creatine, glutamate, and alanine but could not manage phenylalanine and methionine. Phenylalanine [50] and methionine [51] are the results of oxidative stress. This indicates that the treatment method is unable to target the oxidative state of the patients which could be a major role in leading to mortality in patients, even though there were improvements in other metabolites concentration.

Various limitations need to be acknowledged. Though our study is of a decent sample size, it is still relatively small. The results need to be validated in a larger sample size. This study attempts to provide an insight into the metabolic signatures of early recovery of septic shock patients. This was our objective to enhance our understanding of the mechanistic underpinnings of septic shock. This is the first metabonomics study demonstrating the link between pre-treatment and post-treatment time-dependent metabolite changes in patients with septic shock. This type of metabotyping may help clinicians by monitoring therapeutics.

The results of this study can be considered the future of therapeutics, especially for septic shock. The metabolites identified can be used in therapy management with the potential for efficient monitoring of treatment by assessing the response of patients based upon the metabolites. It could benefit the patients undergoing septic shock treatment by assessing their response to treatment and giving an option to clinicians to alter the treatment plan according to patients' responses paving way for personalized medicine.

The authors acknowledge the Centre of Scientific and Industrial Research (CSIR), INDIA, for the research fellowship.

The authors have declared that no competing interest exists.

45. Laffel, L. Ketone Bodies: a Review of Physiology, Pathophysiology and Application of Monitoring to Diabetes.1999;15:89-92